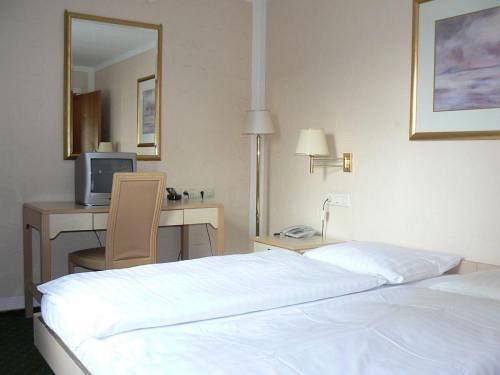 The reception at the Hotel Mack in Stuttgart is occupied around the clock by multilingual staff. Therefore the cosy little city hotel is often frequented by international city travellers. Being close to the Stuttgart trade fair, it is also a popular place to stay for private and commercial trade fair visitors. Rooms with modern comfort at the Hotel Mack The house dates from 1950, but has been frequently renovated in recent years, so the 30 rooms also feature modern comforts. There are 11 single rooms and 19 double rooms available, of which six can be used as three-bed rooms. The soundproof windows ensure a quiet night and hairdryer, desk, telephone and television come as standard. There is also free WiFi available in the public area of the hotel. Hotel Mack: centrally located and easily accessible In the centre of the city of Stuttgart, the Hotel Mack is easily reached by both car and rail. As well as the railway station opposite the Hotel Mack there are also some famous sights in walking distance, such as the Stuttgart Palace or the Hans-Martin-Schleyer-Halle. The Stuttgart-Echterdingen airport is located about eight kilometres away from the Hotel Mack. There is a taxi stand in the immediate vicinity of the hotel. Business hours of reception: On business days: from 07:30 to 00:00 On the weekend: from 07:30 to 00:00.